Our Recommended Best Vibration Plate Is The Sportstech VP300! 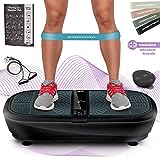 Top Vibration Plates On The Market

Over the years we have seen many devices implementing the theory that by applying vibrations to the appropriate part of the body, fat cells will be broken down and the Nirvana of thinness will be achieved.

It started in the 50s and 60s with a belt that went round the waist or on the fatty bit just below the waist, and was vibrated at high speed.  It became a mainstay of generating sniggers in light comedy films in the Carry-On vein. They were superseded by various ingenious devices that attached belts to other parts of the body making them wobble alarmingly. 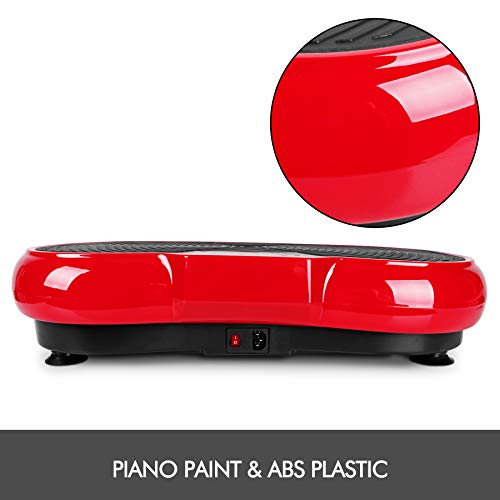 Today, we have the latest technology, the vibration plate, sometimes called a power plate or vibration platform, which works on the same theory.  You might think that they are basically the same, a flat plate you stand on, which then gets you wobbling to destroy fat and build muscle.  Not as simple as you think.

There are several sub-types: 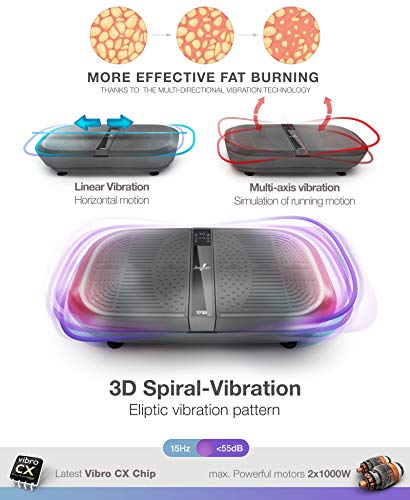 In terms of popularity, oscillators are more popular, particularly for home gyms because of their generally lower price. There is a heated debate about which is better, oscillators or vertical plates for weight loss and muscle development. The jury is still out on that one,  but there is a general consensus that they do work.

The current view, endorsed by celebrities like Madonna, Jessica Alba and Cher is that using a plate regularly increases muscle mass,tones and firms up. Other benefits are reductions in cellulite, improved circulation and a general gee-up to the metabolism.  Physiotherapists are now using them.

Other things to look for:

The power rating of the plate defines how well it will handle the load placed on it.  The more power the bigger the jiggles, the bigger the benefit.  For the same effect, a plate supporting the larger among us will need more oomph that one supporting a stick insect. 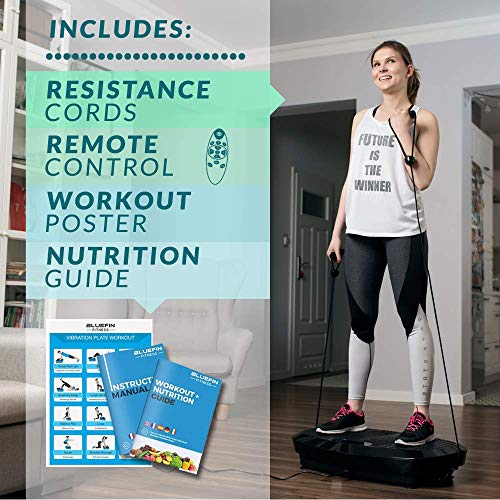 Having worked out the amplitude, the next step is how often it wobbles, the frequency.  You should be able to vary the frequency in the same way as the amplitude to have the best combination for the exercise you are working on.

Other Things to Note

Yes, there are a bunch of accessories for use with plates.  Upper arm bands work out your arms, and perhaps your thighs if you are so inclined.  Most good ones come with bluetooth speakers. 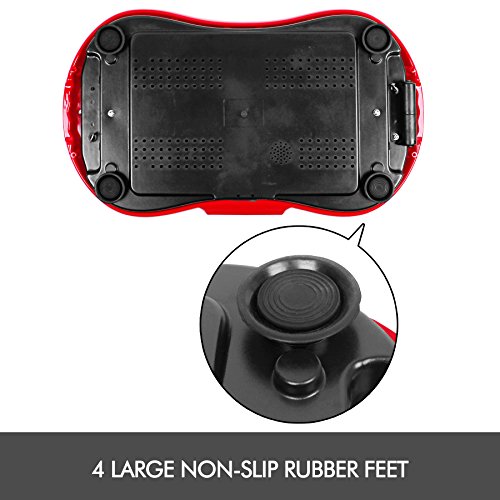 Some exercises need a vertical motion, while others need an oscillating motion.  If you need both, be careful not to choose a plate that allows one only.  Some will provide both, and at the same time.

The control panel on the plate can have all sorts of additional stuff – BMI and calorie counters, exercise programmes for example.

Finally make sure it has a good warranty. 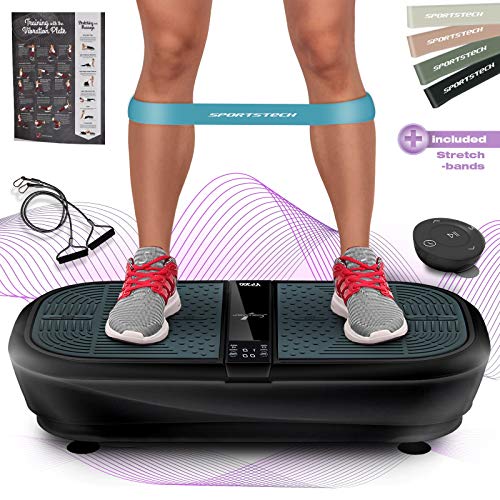 The German designed and built Sportstech VP300 has a very large plate (800x450mm) which allows for a full range of exercises.  It has two powerful motors providing a total of 1000Watts, each adjustable to 60 different speed levels.   The Vibro CX chip in the machine provides an adjustable 5-12 vibrations per second and the 60 speed levels.

It has been designed to stimulate muscle development by applying targeted vibrations to the chosen area. 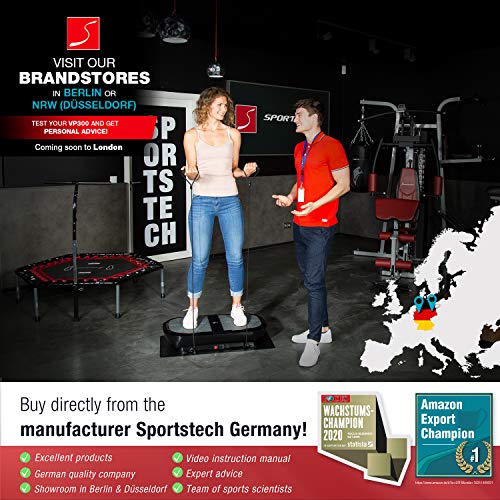 Note that the maximum weight it will support is 120Kg.

User reviews are very good, but one gripe is that it comes with a European two-pin plug.  Unless you have a universal adapter sitting around after your last overseas holiday, you need to get one. 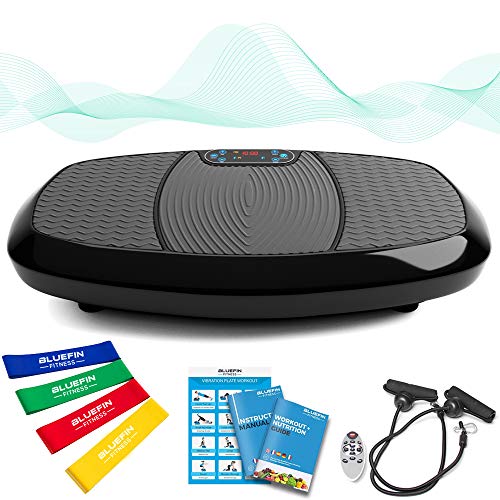 The dual motor plate from Bluefin claims to offer 3D vibration and oscillation.  It also has integrated Bluetooth speakers .

It has the following features: 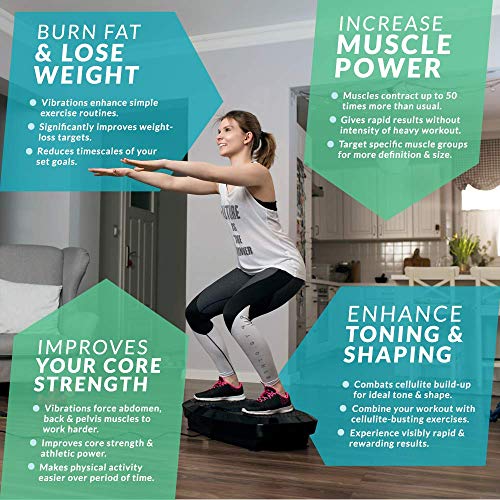 The machine weighs 19Kg and will allow users up to 150Kg in weight.

User reviews are generally favourable, though there are some serious gripes about product quality and after-sales support. 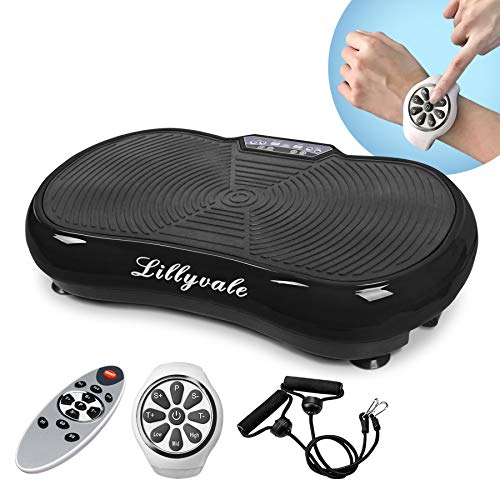 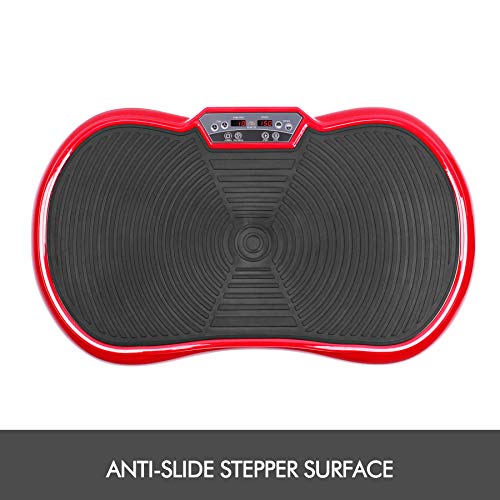 It has a remote,  but once again, batteries are not included.   It comes in the form of a remote watch.

User reviews are generally favourable.  One interesting point was that using a TV remote near the LIlyvale can change the workout specs.  A bit of a surprise for the user, but a good laugh for the couch potato flicking through the TV channels.

It might seem a bit faddy and overblown, but a plate has some credibility.  A Belgian study showed that it can accelerate weight loss and increase general fitness. 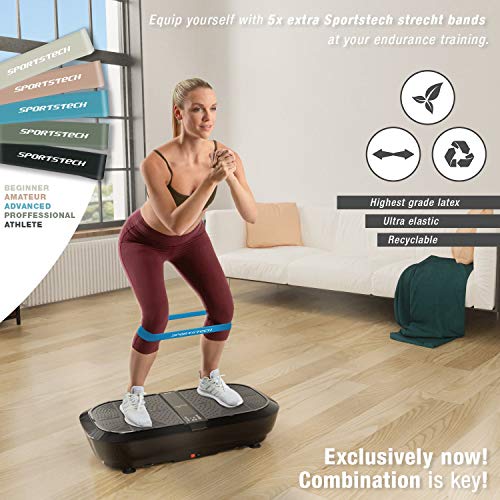 Of the three shown here, we will discount the Bluefin because of some very strident complaints about product quality and after-sales support.  It is in the same price bracket as the Sportstech.

That leaves the Sportstech  and the Lillyvale. Our recommendation is that despite the higher cost, the Sportstech is better value because of build quality and the range of features it provides.